Home / News / PUBLICATION ON WAR CRIMES IN SANSKI MOST

PUBLICATION ON WAR CRIMES IN SANSKI MOST 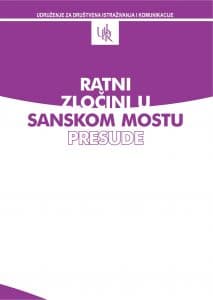 Association for Social Research and Communication (UDIK) presents publication War crimes in Sanski Most – verdicts. Within this publication UDIK documented war crimes committed in the area of the pre-war Sanski Most municipality and presented a list of names of 580 exhumed and identified persons. This is a seventh book of the edition: War Crimes – transcripts of verdicts of courts in Bosnia and Herzegovina.

War crimes against Bosniaks and Croats in Sanski Most began with the takeover of power by Serb forces. This was preceded by the return of the JNA sixth Partisan Brigade, which took part in the war in Croatia. On April 20, 1992, this unit took control of all major facilities in the city, and simultaneously established full control of road communications. Mass murders of Bosniaks were carried out on the Muhići, Mahala, Otoka, Hrustovo, Vrhpolje, Kljevce settlements.

On this occasion, UDIK’s Coordinator Edvin Kanka Ćudić pointed out: „With this book UDIK gives lasting significance to the Bosnian Krajina and emphasizes that Sanski Most was not forgotten, and that the war crimes committed by Serbian forces in this city must not to be forgotten. From 1992 to 1995, they were torturing and killing Bosniaks and Croats, and destructing their properties. There were more than twenty camps and other places of detention in the municipality. The detainees were physically and psychologically tortured, later murdered. The killed Bosniaks and Croats of Sanski Most municipality were found in numerous mass graves, the largest of which were Hrastova Glavica and Sasina.“

Ćudić points out that the heaviest period, in addition to that of 1992, occurred immediately before the taking over of Sanski Most in 1995: „In September 1995, a large number of Bosniak civilians were killed in several locations. Only in Sasina village were killed 60-70 persons. The killings were carried out in Sanakeram, Kruhari, Tomina, Trnova, Vrš, Okreč and Došće.“