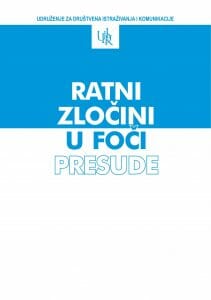 The Association for Social Research and Communication (UDIK) today presented in Sarajevo a new book entitled War crimes in Foča – verdicts. The publication is a part of the edition named War crimes – transcripts of verdicts of courts in Bosnia and Herzegovina. Also, this edition includes judgments of domestic courts for crimes during the Bosnian war committed in Brčko, Višegrad, Konjic, and Sarajevo.

„I first visited Foča in 2012 as a journalist, and in the coming years as a coordinator of UDIK. On that occasion I was amazed by the nationalism and non-return of the non-Serb pre-war population to that city.”

At the conference, it was pointed out that the verdicts are another proof that Foča during the ethnic cleansing completely lost the Bosniak population, whose property was looted and burned, while civilians were arrested and taken to camps. The illegal arrests and detention of non-Serb civilian men were carried out massively and systematically. In addition to the KPD, there were many other camps: barracks Buk – Bijela, High School in Foča, Sports Hall „Partizan“, „Lepa Brena“ building, Karaman’s house in Miljevina, JNA warehouse in Livade, etc. In these places, people were killed or systematically abused, and most survivors still have trauma.

„This publication will be useful for future researches on human rights violations. Also, it should be a lesson to all the Serbs in Foča, that such crime must never happen again”, emphasized coordinator Ćudić at the end of the conference.