25TH ANNIVERSARY OF THE SREBRENICA GENOCIDE 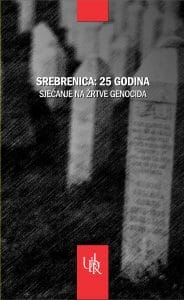 This year marks the 25th anniversary of the Srebrenica genocide – the largest massacre committed on the European continent since World War II. The Srebrenica genocide was the July 1995 genocide of more than 8,000 Bosniaks, mainly men and boys, in and around the town of Srebrenica during the Bosnian war. More than 30,000 women, children and elderly were forcibly deported. In an effort to conceal the crimes which they have committed, the Republika Srpska Army (VRS) relocated the bodies from the sites of mass execution, burying them in a series of mass graves throughout the Podrinje. To date, a few hundred primary, secondary and tertiary mass graves have been located and exhumed.

The International Criminal Tribunal for the former Yugoslavia (ICTY) and the International Court of Justice (ICJ) have officially declared the July 1995 Srebrenica massacre a crime of genocide. By the decision of the European Parliament, from January 2009, July 11 was declared the Day of Remembrance of the genocide in Srebrenica.

The second publication is entitled Srebrenica: 25 Years, Remembering the Victims of Genocide. The book documents the names of 6,879 victims of genocide buried between 2003 and 2019. 6,642 people were buried in the Srebrenica Memorial Center, while 237 victims were buried in other local cemeteries. Data for this book were obtained from the Srebrenica Memorial Center and the Institute for Missing Persons of Bosnia and Herzegovina.

By publishing these books, UDIK wants to remind once again that despite the annulment of the Report, the fact remains that genocide was committed in Srebrenica in July 1995, which was confirmed by two international courts. The facts will not change, regardless of the effort that is being made to rewrite history. We publish the books in memory of the victims of the Srebrenica genocide.