Home / News / MONUMENTS AND POLITICS OF MEMORY IN BOSNIA AND HERZEGOVINA AND CROATIA, CONTROVERSIES

MONUMENTS AND POLITICS OF MEMORY IN BOSNIA AND HERZEGOVINA AND CROATIA, CONTROVERSIES 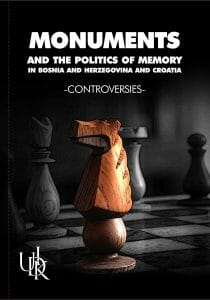 The Association for Social Research and Communication (UDIK) today presented in Sarajevo the most recent publication entitled Monuments and politics of memory Bosnia and Herzegovina and Croatia, controversies. It’s actually the sixth book from UDIK’s edition Memorials.

This book represents a research whose aim was analyzing and showing some of the basic elements of today’s politics of memory in our region, primarily in Bosnia and Herzegovina and the Republic of Croatia. Two experts worked together with the UDIK team on the selection and analysis of the monuments and did the expertise for the needs of this book. One of them is Amra Čusto from the Cantonal Institute for the Protection of Cultural, Historical and Natural Heritage Sarajevo and the other is Vjeran Pavlaković from the Faculty of Philosophy of the University of Rijeka.

On this occasion, UDIK’s coordinator, Edvin Kanka Ćudić said: „The aim of the conducted monument research was monitoring and analyzing the established politics of memory, as well as practices in today’s culture of memory. In order to provide a clearer representation of the existing politics of memory in Bosnia and Herzegovina and Croatia, we have analyzed a certain number of the monuments using the existing database, numerous sources of literature, newspaper articles, video attachments, etc.“

“For this analysis the purpose was to choose monuments that caused harsh reactions in the public sphere, leading to conflicts and divisions in the community. Such monuments were characterized by the public as controversial. The public disapproves of them because they are dedicated to the heroes who are considered by another ethnic group as criminals, because their appearance and symbolism offend the “others” in the community, because they misrepresent events from the past, etc. There are a considerable number of such monuments, but this analysis mainly involved those which caused great interest and public outcry, long-term polemics, as well as the reaction of local and state authorities”, said Ćudić.

Also, the book offers a translation into English, so that those who do not speak any of the official languages ​​in Bosnia and Herzegovina are closer to the purpose of this book. Like all other UDIK publications, this book is also available in numerous libraries in Bosnia and Herzegovina and the region, and all interested citizens can get a free copy by coming to UDIK offices in Sarajevo.