Home / News / THE ANNIVERSARY OF THE WAR CRIMES IN ČAJNIČE

THE ANNIVERSARY OF THE WAR CRIMES IN ČAJNIČE 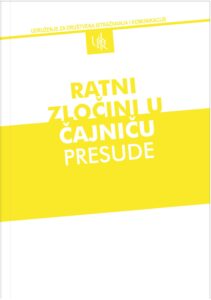 On the occasion of the 29th anniversary of the suffering of civilians in Mostina near Čajniče, the Association for Social Research and Communication (UDIK) presents the publication “War Crimes in Čajniče – Verdicts” documenting the judgments of the Court of Bosnia and Herzegovina for crimes against civilians in Čajniče and the surrounding area.

The Court of Bosnia and Herzegovina has handled several cases related to war crimes committed in this area. All cases were conducted against members of the Republika Srpska Army (VRS). To date, the Court has sentenced Milorad Živković, Milun Kornjača, Milosav Jovanović, Marijan Jovanović and Slavko Jovanović to six to eleven years in prison. Duško Tadić and Stevo Jovanović were acquitted. In 2015, the State Court confirmed the indictment against Duško Kornjača, charging him with the criminal offense of crimes against humanity, but he is inaccessible to the judicial authorities.

The discussion at the end of the book was written by Emza Fazlić, a spokesperson for the Institute for Missing Persons of Bosnia and Herzegovina. She said: “A total of 138 missing persons were reported in the area of Čajniče. To date, 90 victims have been found and identified. So far, the remains of 68 exhumed men and 22 women have been handed over to their families. The fate of another 48 people from Čajniče, who are still being searched for 18 years after the horrific crimes, is completely unknown.”

“The largest grave with the bodies of Bosniaks from Čajniče is one of the graves in Mostine, from which the remains of 18 victims were exhumed in September 2002. The youngest victim in this mass grave was Zlatko Bukva. He was only 19 at the time he was killed. In addition to this, six more mass graves were found in Mostine, from which the bodies of a total of 60 victims were exhumed”, said Fazlić.

With this book, UDIK wants to pay tribute to all the killed civilians of Čajniče and the surrounding area.