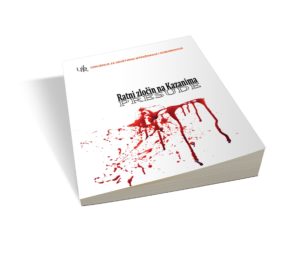 On Tuesday, October 25, 2016 the Association for Social Research and Communications (UDIK) will organize a press conference in order to present the publication “War crimes at Kazani – JUDGMENTS” as a second part of the edition “War crimes – transcripts of judgments of courts in Bosnia and Herzegovina”.

This war crime was committed by members of the 10th Mountain Brigade of the Army of the Republic of Bosnia and Herzegovina under the command of Musan Topalovic, alias Caco. They were responsible for the murder of Croatian and Serbian civilians in Sarajevo who have been tortured, killed and dumped in the Kazani pit. 14 soldiers were sentenced to 10 months to six years in prison for the killings in Kazani. Topalovic was killed the day after his arrest while attempting to escape.

The aim of this documentation is clearer presentation of the judgments for war crimes in Bosnia and Herzegovina, but also prevention of possible manipulation with adjudicated facts regarding convicted war criminals. The publication is also an attempt to build a sustainable peace and create opportunities for building a monument to civilians killed at Sarajevo’s Kazani.

Press conference will take place in Kino Meeting Point at 11 am.