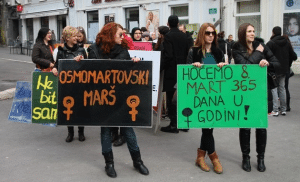 Association for Social Research and Communications (UDIK) acts through feminist theory. Feminism is a movement that strives for equality of the sexes and genders. It is not predominance of women in the community, as it is often interpreted.

Feminist engagement of Association for Social Research and Communications (UDIK) is:

Because patriarchy is not only a system of domination (one sex over the other, one class, race, nation over another), but patriarchy is the main cause of the war. Patriarchy is what made community violent and its values are accepted in community without knowing that that values guarantee violence.

Because nationalism is one of the most visible and most destructive manifestation of patriarchy – woman is seen only as mother and wife, the machine for procreation, depriving women from her right to choose and self-determination. Nationalism is ideology of a nation that it is “the best”, in everything. It usually occurs when the nation is experiencing a kind of weakness of their collective identity and seeks to strengthen the community. Unfortunately, it often does that in the detriment of other people who are “the best” as they are. Nationalism, as a part of the patriarchy system, is what prevails in the value system of societies in our region.

Because the militarism armed patriarchy, because the costs of war, army and weapons affect the weakest in community, because militarism relies on the power of violence when it comes to problems solving. Militarism constantly encourages society’s readiness to fight against the enemy. Militaristic people sometimes do not understand that there are many ways to resolve the conflict except through the violence.

For strict separation of church and state – opposition to church which attempts to impose social policies that radically reduces the achieved level of democracy and human rights. Freedom of religious practices should also be understood as freedom from religious practices. Consequently, the influence of religion in the country should be strong.

We advocate for equality of sexual minorities and the right to choose as a basic human right.

Discrimination is the exclusion of anything seen as other and different, which is actually based on the fear and ignorance. We are radically against discrimination and we want to build a different system of values that advocates for a Just Peace in the community.

AGAINST IDEOLOGY AND MONARCHY

Advocate against slavery, exploitation and abuse in community that fosters violence. Educating society about freedom and liberation from current ruling system, to achieve a democratic and ethical lifestyle.