INITIATIVE FOR RAISING MONUMENT TO VICTIMS OF SARAJEVO’S KAZANI 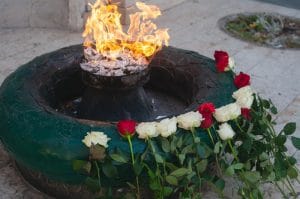 In October 2020, an initiative was launched to build a monument to the victims of the Sarajevo’s Kazani. The initiators were the Association for Social Research and Communication, the Forum ZFD Bosnia and Herzegovina, the Network for Building Peace and the Center for Nonviolent Action. The initiative states that the authorities of the city of Sarajevo should erect a monument to the killed victims in Kazani pit in the center of Sarajevo without further delay. Such a monument would symbolically show that Sarajevo, which has suffered the longest siege of the city and experienced the most brutal killings of civilians during the siege, is ready to condemn the crime in its own ranks and begin a process of public constructive dealing with the past. This would make it clear that there is no “but” in Sarajevo.

On the occasion of the anniversary of the suffering of Sarajevo civilians in Kazani, on Sunday, October 25, 2020, in front of the Eternal Flame in Sarajevo, the initiators, together with the citizens of Sarajevo, paid tribute to the victims.