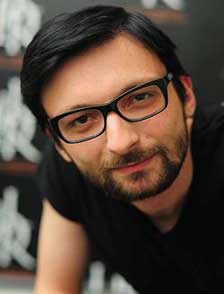 Edvin Kanka Ćudić (Brčko, 1988) – founder and current coordinator of UDIK since 2013. His work includes the complete coordination of UDIK activities, relations with government institutions, regional partners, international organizations, public relations, research and analysis, and participation in policy making and overseeing its implementation. As the UDIK coordinator, he was the initiator, organizer, participant in peace marches and other forms of UDIK activities, as well as numerous activities against war, nationalism, militarism and homophobia.

He graduated from the Faculty of Political Sciences in Sarajevo and completed several educational courses on human rights and peacebuilding.

He speaks fluently Bosnian, English, Turkish, and Persian language. As a reporter he published articles in newspapers and on internet portals in the country and abroad, such as: Dnevni Avaz, Monitor, Slobodna Bosna, Behar, Republika, Peščanik, e-novine, etc.

Also, he is the master of the Japanese martial arts: Jū-jutsu and Jūdō.

From 2006 to 2008, he was a teacher of Jū-jutsu in martial arts clubs in Donji Žabar and Gornji Zovik near Brčko.