Home / News / THE ANNIVERSARY OF THE CLOSURE OF THE SUŠICA CAMP

THE ANNIVERSARY OF THE CLOSURE OF THE SUŠICA CAMP 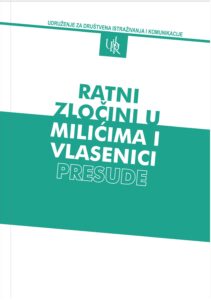 The Association for Social Research and Communication (UDIK) reminds the public of the 29th anniversary of the closure of the Sušica camp near Vlasenica, which was a camp for detaining, torturing, raping and killing Bosniaks from the Vlasenica area. Between May and September 1992, as many as 8,000 Bosniak civilians and other non-Serbs from Vlasenica and the surrounding villages were successively detained in the hangar at Sušica camp.

On the occasion of the anniversary, UDIK presents the publication “War Crimes in Milići and Vlasenica – Verdicts”, which documents three cases brought before the Court of Bosnia and Herzegovina for crimes committed in the pre-war municipality of Vlasenica. The Court of Bosnia and Herzegovina sentenced Predrag Bastah to 22 years and Goran Višković to 18 years imprisonment, while Dragan Marinković was sentenced to 8 years imprisonment for war crimes in the municipality of Milići.

At the beginning of 2005, the International Criminal Tribunal for the Former Yugoslavia (ICTY) convicted Dragan Nikolić aka Jenki, the commander of the camp, to 20 years in prison after pleading guilty to participating in the 1992 killings, rape and torture of Bosniak prisoners at the Sušica concentration camp.

According to the Institute for Missing Persons of Bosnia and Herzegovina, 955 Bosniak victims went missing in the municipalities of Vlasenica and Milići between 1992 and 1995. These persons disappeared as a result of war crimes, but they are not related to the fall of protected zones, i.e. to the genocide committed in July 1995.

At the end of this book is a list of identified persons from the municipalities of Vlasenica and Milići who disappeared in the period from 1992 to 1995. The data were taken from the Institute for Missing Persons of Bosnia and Herzegovina.

These judgments of the Court of Bosnia and Herzegovina published in this book may not be sufficient to understand the war crimes and atrocities that took place in Milići and Vlasenica, but they can serve as evidence of the evil that arose among the people during that period. We publish the book in memory of the killed civilians from the area of Vlasenica and Milići.