Home / News / THE ANNIVERSARY OF THE GRABOVICA MASSACRE

THE ANNIVERSARY OF THE GRABOVICA MASSACRE 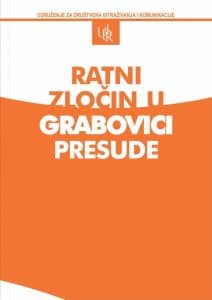 On the occasion of the 26th anniversary of the war crime in the village of Grabovica, near Jablanica, the Association for Social Research and Communication (UDIK) presents the publication War Crimes in Grabovica – verdicts. This is the eighth book of the edition: War Crimes – transcripts of verdicts of courts in Bosnia and Herzegovina.

The Grabovica massacre refers to the murders of 33 ethnic Croat inhabitants of the village of Grabovica located between Jablanica and Mostar by members of the Army of the Republic of Bosnia and Herzegovina. The massacre occurred during Operation Neretva ’93, which aimed to conquer HVO-controlled areas from Bugojno to Mostar. The victims included 17 women and one child. The youngest victim was Mladenka Zadro, a four-year-old girl, and the oldest, 87-year-old Marko Marić.

Bosnian commander Sefer Halilović was indicted by ICTY on the basis of superior criminal responsibility and charged with one count of violation of the laws and customs of war (Article 3 – murder). Having examined all the evidence presented to it and in light of its factual findings, the ICTY found that the Prosecution did not prove beyond reasonable doubt that Halilović had effective control over the troops in Grabovica on 8 and 9 September 1993, who the Trial Chamber has found committed the crimes. Halilović was subsequently acquitted and ordered released immediately.

This publication includes three convictions for war crimes committed in the village of Grabovica, issued by the Cantonal Courts in Mostar and Sarajevo, and the Supreme Court of the Federation of Bosnia and Herzegovina. They were sentenced Enes Šakrak, Haris Rajkić, Mustafa Hota, Nihad Vlahovljak, and Sead Karagić from nine to thirteen years in prison.